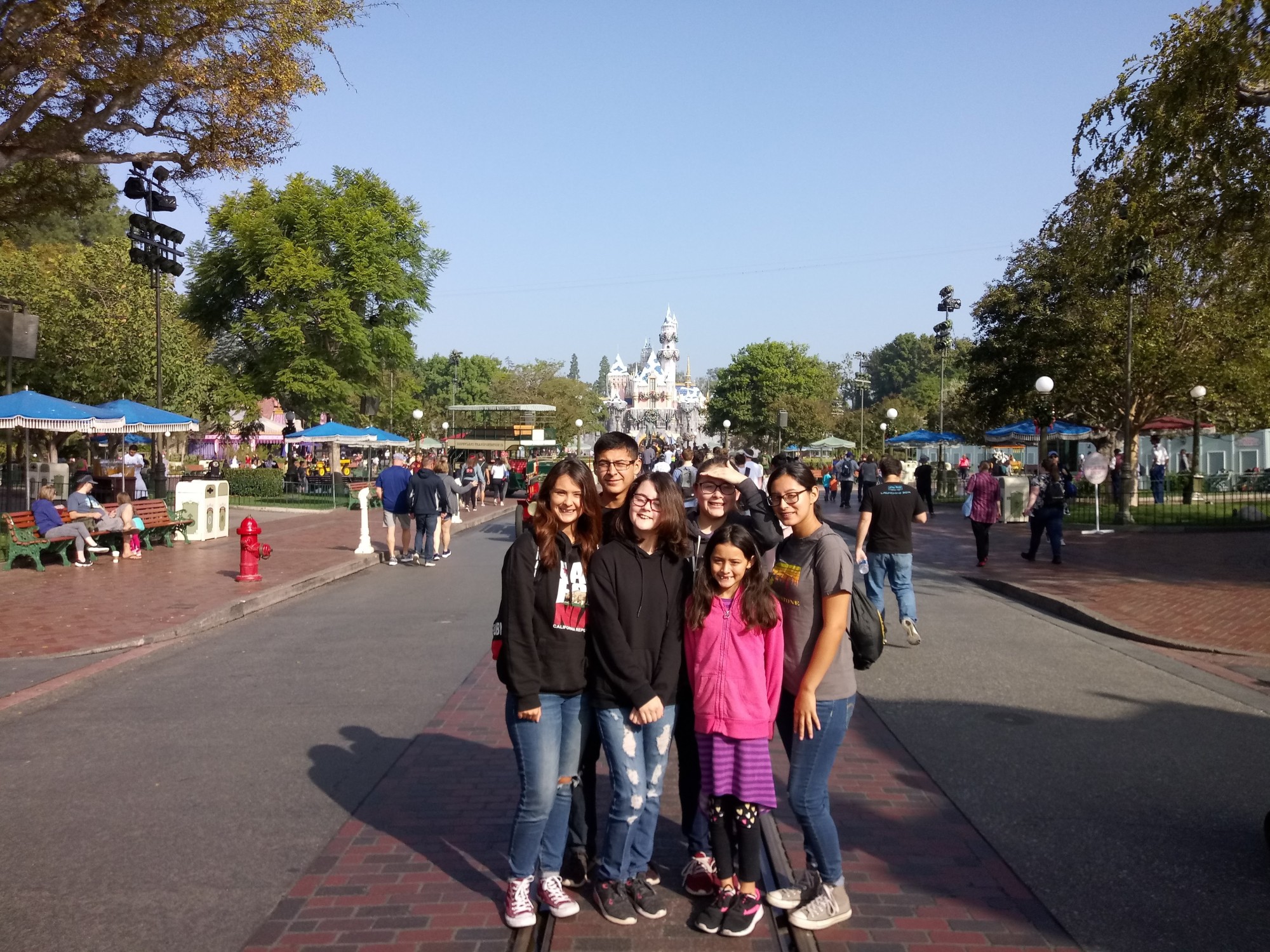 Disneyland started out with an unfair advantage because we went there after a week of solid activity. The day before we had gone to Universal Studios, the day before that was another amusement park, Knott’s Berry Farm. The day previous to that was the Warner Brother’s tour, wax museum, walking around downtown L.A. and spending the evening at OUE SkySpace. Etc. Etc. Etc. We were all exhausted and had sore feet and needed a break from our go-go-go schedule. None of us were at our bests.

I’ll start with the similarities between the two destinations. DL was comparable to Magic Kingdom in regards to the layout and with the different areas such as Tomorrowland, Frontierland, and Fantasyland. Both start on on Main Street USA with barbershop quartet type entertainment, Disney themed gift shops, and the castle at the end of the road; Cinderella’s castle in WDW and Sleeping Beauty’s smaller castle in DL. They have many similar rides and attractions, some being identical as far as I could tell, with many more at WDW than at DL. You can meet costumed characters at both locations including Mickey, Star Wars characters, and princesses, but again with more variety in WDW.

One big difference between DL and WDW is size. DL consists of 2 parks, Disneyland Park and Disney Adventure Park, while WDW consists of 4 parks, Magic Kingdom, Animal Kingdom, Epcot, and Hollywood Studios. For comparison, I will be specifically referring to Disneyland Park and Magic Kingdom. Even comparing only those two parks, DL is still quite a bit smaller than WDW. Before going to DL, I read a lot of comparisons and concluded that many of the people who grew up going to DL preferred that once visiting WDW as an adult, and vice versa, many of the people who grew up going to WDW preferred it once visiting DL as an adult.

There are benefits to DL’s small size. Most of the lines we encountered, when we actually encountered lines, were only 10-20 minutes long, tops, as opposed to sometimes waiting an hour or more for rides at WDW. We were there from 9am to 10pm. At WDW, it can take that entire time to see all the characters and do all the rides. At DL, we finished everything by 7 and spent the last couple hours revisiting our favorite attractions. We never felt rushed and it was slower paced than what we do at WDW.

There are also benefits to WDW’s larger size. The most obvious being that there are more rides and attractions at WDW. We always make sure to catch the parades at WDW, they are unbeatable! We assumed DL would have the same type of parade and scheduled our day to make sure we caught their parade. WDW has large crowds line the streets and have employees there keeping people out of the way. We got to the parade route and wondered where everyone was. There were some people, but not large crowds by any means. And we soon found out why. The parade went by and we all said, that was it?! There weren’t floats for each princess and Disney story, there weren’t bands and dancers and hoopla. The costumed characters came out, as a group, danced to one song, and moved on. You could see the beginning and end all at the same time. It was disappointing.

For me personally, the biggest difference between DL and WDW was that WDW has always been our vacation destination. I do so much planning and we get so excited and the whole vacation is centered around Disney. Disneyland wasn’t our vacation destination, it was a day trip. We drove there in the morning and left when we were done. At WDW, we’re there for the week and even leaving the park area, you’re immersed in Disney everything back to the hotel. It’s 24 hours of Disney for that week. DL seemed to lack that Disney magic that WDW holds for me. So my overall preference is WDW over DL, but this is a very personal preference and I could understand someone growing up with the smaller, quainter, history filled DL preferring it to what they could consider an overwhelming WDW.

I would love to hear the opinions of others who have been to both parks. Leave me a comment or a question and come back again soon!

One thought on “Disney World vs. Disneyland”